Music consumption and usage has shifted since the COVID-19 crisis began over two months ago. BMAT, the Barcelona-based music monitoring and reporting service, have been listening to the trends and closely monitoring how this unprecedented time may have affected our music patterns.

The results of their analysis appear in their just-launched report What the FAQ is going on with music right now?

“Consumers and radio programmers alike have been turning to older tracks and deeper catalog, as opposed to new hits,” says Kelly Abel of BMAT. For example, the study found that the number of pre-2010 songs charting in the UK doubled, reaching 8.7% of all songs on the charts. Spain and Italy showed signs of increased nostalgia, and in Spain, inspiring older anthems like the song “Resistiré” dominated radio listening.

Radio broadcasters show less of a shift than digital when it comes to genre, though Hip Hop loses some share, while R&B sees slight gains.“What we do see is that we humans adapt quickly to unprecedented moments of difficulty. It’s clear that we look to music to get the emotional comfort we need – whether that’s finding strength in anthems, reviving old familiar hits or listening to soothing music.” Kelly explains. 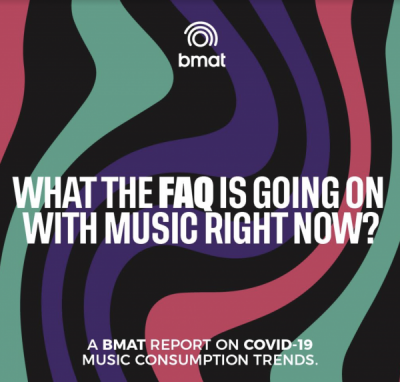 Despite expectations, speech content for some analysed regions only ticked slightly upward – 0.35% – versus music on the radio, perhaps a mild reflection of the increase in urgent news coverage the pandemic has been demanding.

“We’ve tried to capture the nuances and focus on some markets like Spain and Norway that have faced significant changes but haven’t been covered as widely yet in the global media.” says Kelly. The impact of the coronavirus and quarantine on media and music has been dramatic in some niches – sports broadcasting, for example – yet barely noticeable in others.

The spread of different catalogues of music is showing early signs of evolution. “There’s a new balance between commercial, production, and commissioned music emerging on TV,” explains Kelly. Traditional advertising music has fallen by up to 50% in some regions, and though advertisement seconds overall dipped only slightly, more local and regionally focused broadcasters appear the most vulnerable to slipping ad revenues.

Receive the full report directly into your inbox by signing up for BMAT’s newsletter here.