Southern California’s alt-rock band Dirty Heads are making a splash with their 2017 track “Vacation,” which earned great charting and streaming success and garnered a TikTok trend in summer 2019 that was catapulted in early January 2021.

TikTok is driving discovery, converting fans and skyrocketing streams for the Dirty Heads across all digital streaming platforms.

The #vacationtransition trend started in summer 2019 and had amassed thousands of videos, but was revived on TikTok when influencer Bryn Sato (@bryniebooo) posted a video of herself sneezing into her elbow, right as the screen transitions to another screen of her frolicking at the beach on vacation, on 12/30/20, to her 1.2M followers. It then took off on 1/8/21 when influencer Glenca Chysara (@glencachysaraofficial) posted it to her 2.6M followers, both with the chorus of “Vacation” playing in the background. 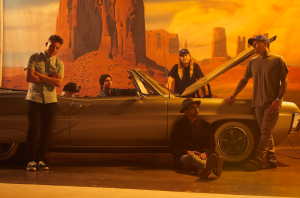 The #vacationtransition hashtag now has over 45.5M views and counting, over 548.5M views across over 493K user generated videos and enters onto the TikTok Viral Charts at #52 (Daily) and #90 (Weekly).

In response to the trend, frontman Jared Watson did his own version of it on the band’s TikTok account, @dirty_heads. On 2/6/21, he sneezed into his arm, which phased into him performing the track onstage in front of thousands of fans at a concert in Florida.

The band originally wrote the song about paying tribute to those who love their jobs.

For those that don’t, there’s still time to try something else. Life’s too short not to do something we’re passionate about. Released in 2017 as part of their sixth studio album, SWIM TEAM, the song was #1 on Billboard Hot Rock & was a top 10 hit on the Mediabase Alternative Airplay Chart.

In 2018, they performed the track on Jimmy Kimmel Live!, and released their own beer, Vacation Session Ale + Pineapple, partnering with Huntington Beach’s Four Sons Brewery. Now, with its resurgence, the song has skyrocketed to this organic viral moment, giving them new fans on different mediums, and increased streams across all platforms by 40 percent.

Watson commented on the trend:

“We’re stoked people are drawing inspiration from the song and the message behind the lyrics. It was cool to see the trend grow organically and watch people enjoying life, whether it’s at work or on vacation. That’s what the track’s all about.”

The original video, posted by Nagma Mirajkar (@nagmaa, 14.6M followers) has since been followed by 420K similar videos of TikTokers, including Mumbai-based dancer, choreographer, and influencer Awez Darbar (@awezdarar, 26M followers) making the same “sneeze” into their vacation, wherever that may be — shooting shots on a ski slope in Vail, CO, snow tubing down a hill, relaxing by the pool, or paddleboarding on a lake, as they dance along to the lyrics of “Vacation”: “Aye aye aye, I’m on vacation every single day cuz I love my occupation.”

It has also taken on a life of its own with food meme influencers @Foodies (18M followers) and @SpiceKingCan (9.3M followers) putting their own unique spin on the trend, opening it up to interpretation across the app.

The band released the current single, “Bum Bum” (featuring Villain Park), in July, while in quarantine, to tide fans over until they finish their eighth studio album, scheduled to be released later this year through Better Noise Music.